Testimonies
﻿The following are testimonies about HEAR His Heart﻿ 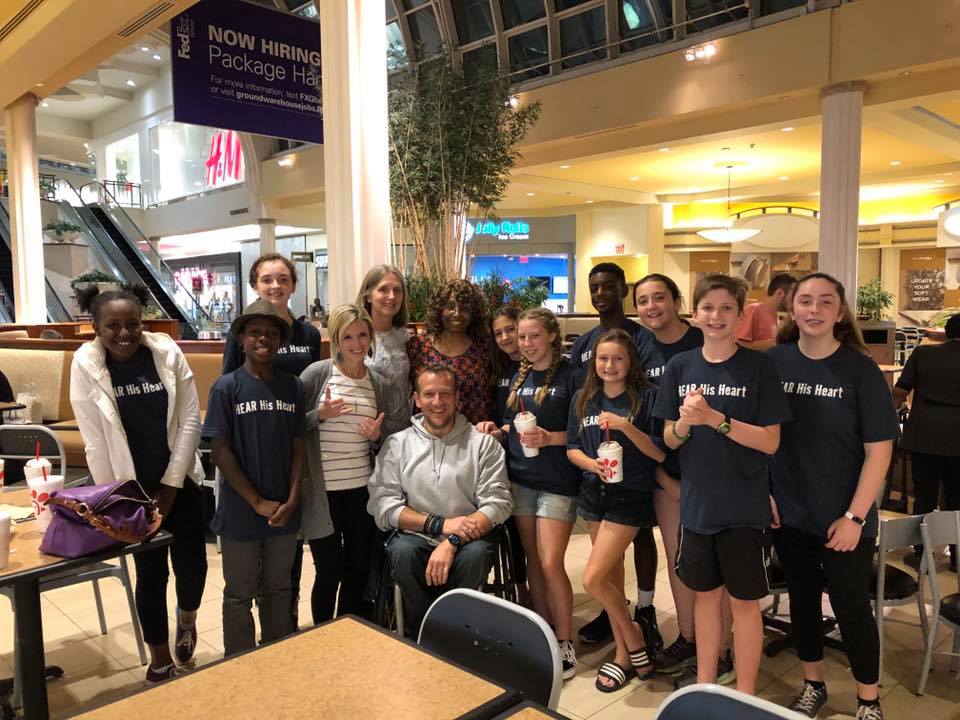 We had a full night of surprises and fun! We learned about the different Jewish feast from Lathan Wood.  Lathan is a wonderful teacher and knows how to engage all the youth in learning more about the Word.  We also had the opportunity to do a treasure hunt that allowed the youth to minister to people. They did such a great job!  We were even able to even minister to a wonderful group of adults from Virginia.  May the Lord continue to provide opportunities for the youth to continue sharing their faith.

Hey Friends,
So I met y'all at the Chick-fil-a in Wilmington the first weekend of December.  I had not originally planned on going but God works in mysterious ways.  As I was standing in line you told me about your ministry and while my children were playing I decided to look your website up.  I felt God urging me to go pray for you, now I must say it's a little out of my comfort zone praying for a stranger especially in a crowded restaurant.  I waited a bit but the push was so strong from HIM that I was standing and nearly pacing when I finally obeyed him. You were so kind when I asked if I could pray with you but you insisted on having the whole group join.  What????!!!  Talk about taking me out of my comfort zone but I went with it because I figured maybe my prayer was needed and I didn't want yall to miss a blessing.  I couldn't have been more wrong, I was the one who ended up being on the receiving end of that blessing. Your children began to speak a prophetic word over me and to say I was blown away would be and understatement! They were so on point with everything! One young lady stated I pour water into little cups..as a matter of fact I do. I am the coordinator for our 2 & 3 year olds at church and I pour water in little cups every Sunday for them for part of their snack. They told me I had a strong call on my life for ministry, they are the 3rd set of people that told me that last year. But the person that stood out the most to me that night was one of your chaperones, he was a tall British gentleman. He told me something that absolutely there was no way he could have known. I lost a child, and he reassured me that he was waiting for me and I would see him again. It brought tears to my eyes and my husband will attest that it's nearly impossible to get me to cry. Please Please thank him from the bottom of my heart for confirming what Jesus had already told me. Each person that spoke was then backed up by the next with what God was telling them. It was awe inspiring to see God work in those children with their gifts! I can't thank you enough for truly blessing me! That night truly changed my life and gave me the push and confirmation I needed to move forward in ministry. I am so thankful that not only I obeyed God but that you were so gracious enough to let God work his miracles. I pray for blessings and prosperity over your ministry and please know the time, love and the word of God that you are pouring into those children are changing not only their lives but everyone they come in contact with. God bless you all!!!

"I went out to the mall with a group from HEAR His Heart and did something called a 'Treasure Hunt.' We asked the Lord for clues and then He took us to people who needed a touch from Him that day. The group of youth I was with asked God for a color, and I got the color 'pink.' We went into a shop that had the color pink in the window and walked up to the counter. We told the girl behind the counter that God had given us the color 'pink' and we were praying for people that had that color. We told her that she was the treasure we were looking to find. She was astonished. We asked her if she needed us to pray for anything. She said, 'Yes, I do. My best friend was just in a bad car accident, and they are planning on pulling the plug on him today in the hospital.'
It was a really sweet encounter that God had led us to this girl whose friend needed prayer. It was an awesome 'treasure hunt' day!"
~Freddie Power

"Ministering on the Streets"

"One day at HEAR His Heart, we went out and were ministering on the streets of Charlotte at a barber shop. We gave encouraging words and asked several people if they wanted prayer while we handed out bags of chips and water on the street. There turned out to be three men who wanted us to pray for them right there. When we finished praying for them, we walked away and they went back into the barber shop. Unknown to us, there was a pastor inside the barber shop. He saw that we were handing out chips and water and thought we were doing a fundraiser, so he stayed inside. When the men who we had ministered to came inside the barber shop they enthusiastically told this pastor to run outside and meet us! But, by this point we had walked to the nearby street corner. The pastor came out of the barber shop and waved and yelled at us, 'Come back! Come back!' When we returned to see what he wanted, he asked us, 'What are you doing? Who are you?' We told him that we were part of HEAR His Heart and just asked him if he wanted prayer. He was taken aback that we were out on the streets ministering to people and sharing the Lord's love. We got to pray for him and gave him encouraging words.  One of the encouraging words he received was so accurate that he knew it was from the Lord! He was so touched and amazed by all of this that he shared this story with his church congregation and invited us to come!"
~Sharon Rowland

"At the Bus Station"

"I prayed for a guy at the bus station that needed a job, and when I prayed I got a picture that really spoke to him. After I prayed, he gave me a hug and he just smiled. It made me feel happy, and he felt happy too."
~ Grace

"I just loved praying for this guy at the bus station that had cancer. I felt like the Lord told me to pray for him, so I did. I felt like he got completely healed while we were praying for him, and to this day I'm still praying for him."
~ Charis
"I prayed for a lady at the bus station. After the prayer, she said, 'Hey! I had a dream about a kid praying for me, and I think it's you. Thanks, that means a lot!'"
~ Cymon
"At the bus station, I went up to this lady and asked her if she needed prayer for anything. She said that she needed prayer for her family, so I prayed for them. When I was done, I felt a chill run up my body. I really felt like her family was safe."
~ Sarai
Proudly powered by Weebly